This is the process of removing a layer of liquid from a solution in which the precipitate has settled.

The precipitate are heavy particles that settle at the bottom of the container containing the solution. Sometimes, it is also used to separate two immiscible liquids. One of the liquids is lighter in weight or less dense. The less dense liquid forms the upper layer whilst the denser liquid forms the lower layer after the solution is left to settle. 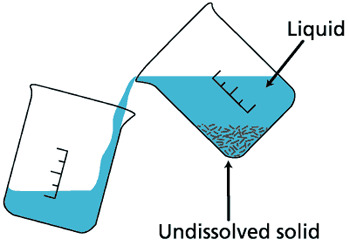 Generally, a small amount of the liquid needed is left with precipitate after the separation is done. Example; Oil and water or mud water.

How to perform decantation

• Add an amount to water in a container and shake.

• Pour the oil into the empty container making sure that the water at the bottom does not go in.

The oil formed the upper layer. After the separation, small amount of oil was left in the water.